Turn On, Tune In And Take Charge With Bitcoin Today 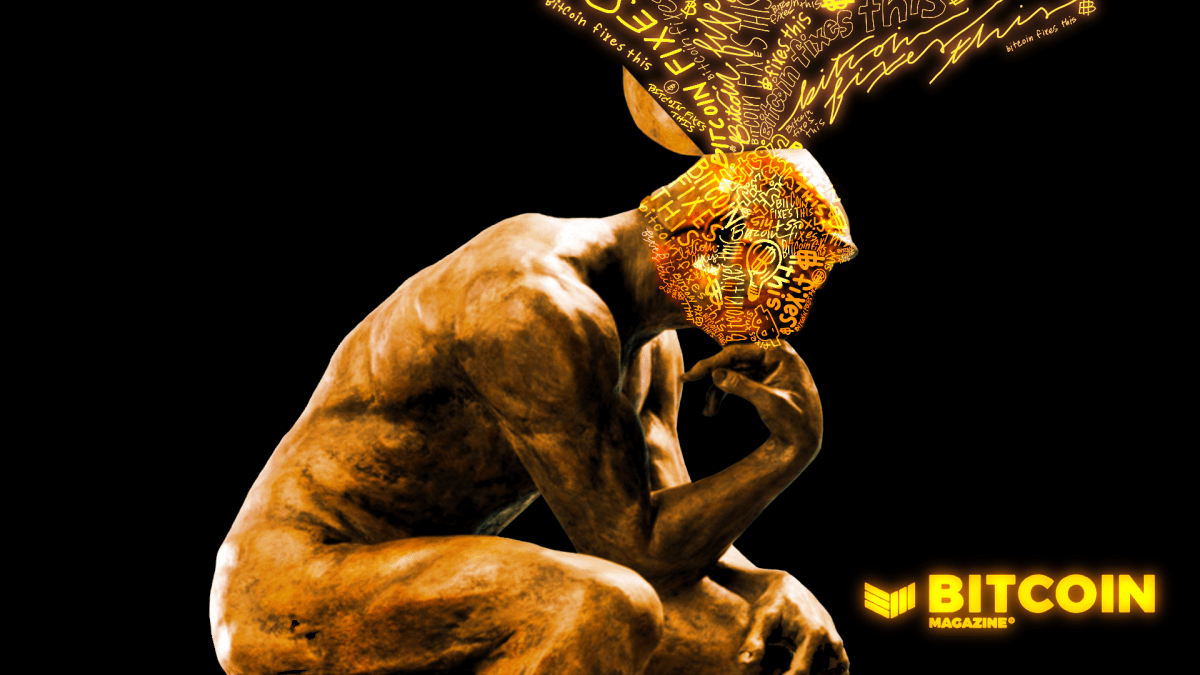 This is an opinion editorial by Yasin Chowdhury, host of the Miami Bitcoin Meetup and technology consultant.

The following is for informational and entertainment purposes only. This is not medical advice, nor does the author or publishing entity condone the use of drugs.

Traveling down the Bitcoin rabbit hole can be a perilous financial and psychological journey. Financially, it is easy to get completely wrecked — whether by taking part in the thousands of different cryptocurrency scams, storing bitcoin on various lending platforms that promise a yield or simply mismanaging your keys. From a psychological standpoint, staying calm through the intense volatility can be difficult, not to mention the sheer cognitive dissonance one may experience going down the rabbit hole. Luckily there is a framework that can mitigate the risks for those who wish to wander down the never-ending Bitcoin rabbit hole. This framework is predicated on the psychedelic movement pioneered by Dr. Timothy Leary.

The similarities between Bitcoin and psychedelics are eerie. It is apparent that both alter human consciousness — psychedelics cause brain change neurochemically, whereas Bitcoin induces brain change through guerilla ontology1 — at another level, both brain change mediums share a similar aura of controversy too.

Psychedelics entered the front and center of American consciousness in the 1960s. Some promising studies were led by Dr. Leary and his cohort at Harvard University. Unfortunately, Leary was far ahead of his time and a little too flamboyant; President Richard Nixon labeled Leary the most dangerous man in America.2 The United States Federal government took things further and banned psychedelic research in 1970.3 In 2022 it is safe to say that psychedelics are again entering the American consciousness. Netflix just released its groundbreaking docu-series “How To Change Your Mind” based on Michael Pollan’s critically acclaimed book. John Hopkins University, University of California Berkeley and New York University eagerly conduct psychedelic research.4 Most importantly, psychedelic-assisted psychotherapy is starting to pick up in several states nationwide.5 Even though these substances can help treat PTSD, depression, anxiety, substance addiction and many other mental ailments, it took nearly 60 years for them to be somewhat accepted by society.

Bitcoin shares a similar history of contention; Over the last 13 years, governments and mainstream media have attacked Bitcoin mercilessly. The legendary investor Charlie Munger went as far as to call it rat poisoned squared, JP Morgan CEO Jamie Dimon championed “Blockchain, not Bitcoin” and China and numerous other countries have banned it many times. In that same duration of time, despite the relentless slander from Bitcoin naysayers, many large corporations have adopted Bitcoin as a part of their treasury strategy- Microstrategy, SpaceX, Tesla and Square, to name a few. Interestingly, two nation-states — El Salvador and the Central African Republic — have made bitcoin legal tender. It is safe to suspect that more corporations, nation-states and individuals will start moving to a Bitcoin standard during this era of intense geopolitical conflict. To help ensure a safe transition to the Bitcoin standard, we can adhere to a framework laid out by the psychedelic pioneers. The framework consists of the following elements:

The estranged Harvard Professor Timothy Leary coined the term set and setting, straight out of the horse’s mouth —

“Of course, the drug dose does not produce the transcendent experience. It merely acts as a chemical key — it opens the mind, frees the nervous system of its ordinary patterns and structures. The nature of the experience depends almost entirely on set and setting. Set denotes the preparation of the individual, including his personality structure and his mood at the time. Setting is physical — the weather, the room’s atmosphere; social — feelings of persons present towards one another; and cultural — prevailing views as to what is real. It is for this reason that manuals or guide-books are necessary. Their purpose is to enable a person to understand the new realities of the expanded consciousness, to serve as road maps for new interior territories which modern science has made accessible.”6

To further elaborate, the set also incorporates the individual’s expectations of the psychedelic experience. Having a clear intention before taking a psychedelic is a must. Whether that intent is to heal from trauma, expand creativity or find meaning is solely up to the individual.

From the Bitcoin lens, set and setting is of paramount importance. If you do not have the right set of expectations, then you are signing up for an unpleasant experience. Are you purchasing Bitcoin to be an overnight millionaire? Will you be restlessly trading in and out of the asset for a quick buck? If these are your expectations, then prepare for disappointment. Bitcoin is geared more toward individuals with a low time preference; it should ideally be used as a saving vehicle, not as a gambling instrument. Having a firm and clear intent to store the fruits of your labor well into the future will aid the bitcoinaut7 during their journey.

As for the setting, it is wise to evaluate where one stands financially — levels of debt, cash flows, solvency, etc., — it may also be prudent to surround oneself with people who have a decent understanding of certain aspects of the protocol. What is sound money? Why are there 21 million coins? What is proof-of-work, the difficulty adjustment and the halving? Keeping peers familiar with the above will allow for smooth sailing through the Bitcoin rabbit hole. Such peers can often be found at Bitcoin conferences, Bitcoin meetups, and on Bitcoin Twitter.

When it comes to mind-altering substances, a solid trip guide is well versed with the substance being used. This person will share any necessary forewarnings — for instance, any individual with a family history of schizophrenia should not touch a psychedelic with a 10-foot pole. An ideal trip guide will also know how to navigate the waters of the dreaded bad trip, often triggered by thought patterns surrounding trauma. The guide will have a tool kit of various mindfulness and breathing exercises to bring the voyager back to a tranquil state of mind; gratitude is also a potent tool in the psychonaut’s arsenal. As a navigator, one should encourage fellow explorers to refrain from mixing psychedelics with other substances. Avoiding raves and festivals for a first-timer should also be encouraged; choose a more intimate and safe setting like a lush, beautiful garden. Nature is your best friend. The trip guide will only procure the substances from reliable sources.

In the Bitcoin sphere, a commendable trip guide will steer the voyagers clear of tens of thousands of different shit coins, NFT mania and yield seeking. A good guide will also highly discourage the use of leverage when purchasing bitcoin. The knowledge of self-custody is a must. An ideal chaperone will have a decent understanding of Bitcoin’s technical, economic and energy aspects. With this breadth of knowledge, the guide can effectively slay any fear, uncertainty and doubt that may arise from the depths of the new Bitcoiner’s mind. Proper etiquette for purchasing sats would be to use Bitcoin-only platforms such as Cash App, Swan, River and Strike.

The final ingredient to conducting a safe psychedelic experience is the correct dosage. Take too much of the substance, and you may have an intense ego dissolution-this can lead to a nerve-racking trip. Take too little of the entheogen, and you may barely feel anything.

Regarding Bitcoin, purchasing the correct amount boils down to the individual’s financial situation and tolerance for volatility. Buy too little, and you may panic on the price run-up; buy too much, and you may feel like a nervous trainwreck on the way down. A good rule of thumb is to simply just dollar cost average in — buying a little bit every time you get paid. Once you deeply understand Bitcoin from several different lenses, continue to stack harder.

The Shattering Of Illusions

One last fascinating parallel between Bitcoin and psychedelics, at least one that should be covered more in-depth, is how these both alter consciousness. Dr. Leary vehemently taught that psychedelic substances open the human psyche to imprinting — a critical learning period. Oh, poor doctor, he was arrested for his brilliant ideas in the 1970s, only later to be pardoned by California’s governor at the time — Jerry Brown8. Leary’s idea of neurological imprinting seems to resonate with the CEO of Multidisciplinary Association for Psychedelic Studies (MAPS). In her own words, Amy Emerson postulates

“What I say is, psychedelics reopen critical periods, they make an old brain young again, they allow you to go back to that state where you’re receptive to the world like a child.”9

During this imprinting phase, one can learn to break old habits, heal trauma and change thought patterns that are latent in the mind. In this critical period of receptivity to new information, one can drastically change their respective worldview.

As mentioned earlier, Bitcoin alters consciousness itself via guerilla ontology. As one traverses the Bitcoin rabbit hole, one is left with an eerie yet unshakeable sensation of cognitive dissonance. The veneer of the clown world starts to fracture, and the Bitcoinaut starts to see through the fiat lies. It becomes clear that our day-to-day lives are predicated on a corrosive fiat system that constantly distorts reality and lends the upper hand to cantillionaires, further exacerbating one of society’s most prominent issues — wealth inequality. Unquestioningly, we engage with fiat illusions from the moment we are born. Fiat-based medicine and hospitals, fiat education, fiat media, fiat consumerism, fiat politics — the list is endless, but all of it is based on a deceitful monetary system. Bitcoin is a system of rules without rulers. In an attempt to understand this phenomenon, Bitcoiners are exposed to Austrian economics, physics, game theory, cryptography, computer science and a heaping dose of philosophy. One eventually comes to realize that Bitcoin is the antithesis of the fiat system; the latter is parasitic, whereas the former enables the further flourishing of humankind. One can now save the fruits of their labor in a system that cannot be debased. Be self-sovereign and stack some sats, or as our beloved friend Dr. Timothy Leary would say, “Tune in, turn on, and take charge!”10

1. Coined by Robert Anton Wilson, “The goal of guerrilla ontology is to expose an individual or individuals to radically unique ideas, thoughts, and words, in order to invoke cognitive dissonance, which can cause a degree of discomfort in some individuals as they find their belief systems challenged by new concepts.

The ultimate goal of guerrilla ontology is to promote positive brain change and new ways of experiencing and adapting to reality.”

University of California Berkeley. Berkeley Center for the Science of Psychedelics https://psychedelics.berkeley.edu/

7. New word to describe Bitcoiners, inspired by Psychonaut “a person who explores altered states of consciousness for spiritual purposes or the exploration of the human condition, including shamanism, sensory deprivation, and the use of psychedelic substances” https://www.macmillandictionary.com/us/dictionary/american/psychonaut#:~:text=DEFINITIONS1,Canada%20on%2023%2F05%2F2017

9. Emerson, Amy. We are the Multidisciplinary Association for Psychedelic Studies (MAPS), a non-profit organization studying therapeutic applications for psychedelics and marijuana. Ask us anything! Reddit. 17 August 2022. https://www.reddit.com/r/IAmA/comments/nh3c97/we_are_the_multidisciplinary_association_for/gyubv8p/

This is a guest post by Yasin Chowdhury. Opinions expressed are entirely their own and do not necessarily reflect those of BTC Inc. or Bitcoin Magazine.