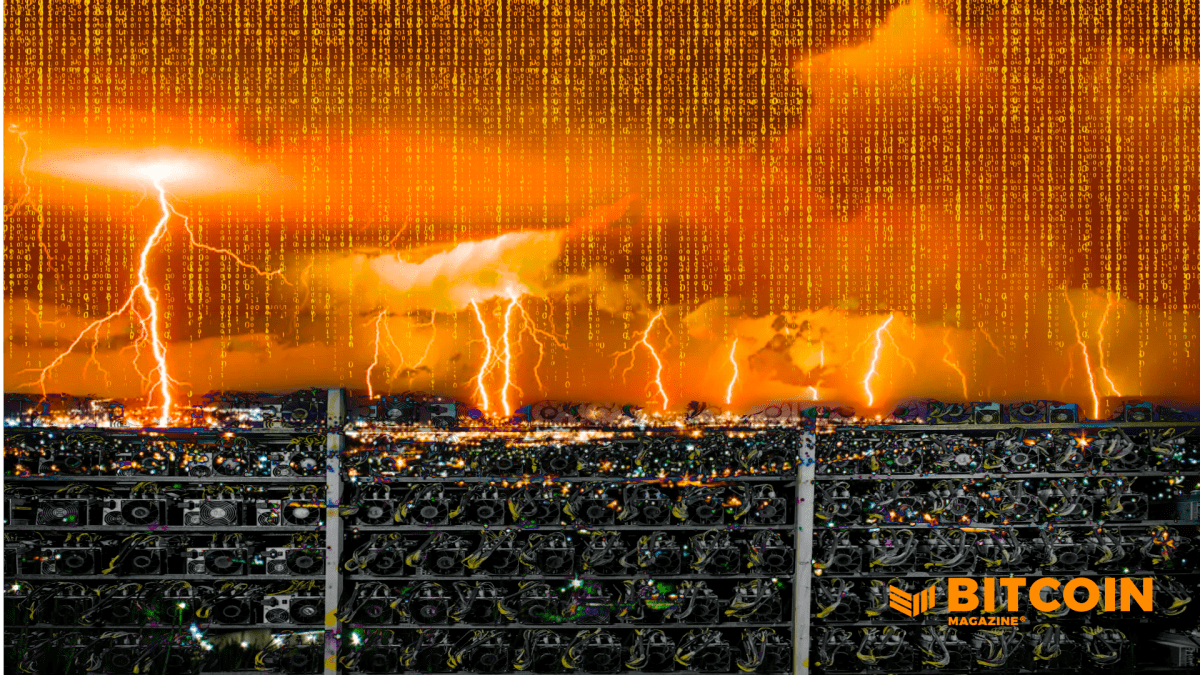 The first day of Keyfest 2022, a virtual Bitcoin conference hosted by Casa, was focused on the future of Bitcoin — exciting applications currently being developed and others that are growing in user base — and the continued growth of the Bitcoin network as it relates to on-chain metrics and global socio-economic impact on the adopting world.

In one panel for select attendees, titled the “Casa Annual Summit,” Nick Neuman, CEO of Casa, was joined by Casa’s CTO Jameson Lopp, its client services manager Andrew Yang and its head of security, Ron Stoner.

Before getting into specific details about Casa’s 2021, they discussed some fascinating statistics around Bitcoin that are quite telling for the network’s future expectations and latest achievements.

The segregated witness upgrade of 2017 separated the witness from the list of inputs which prevents transaction malleability, or the ability to change information provided in a transaction. With limited access, the witness doesn’t allow this malleability to occur. SegWit also allowed the soft fork to accomplish an increase in block capacity without needing a hard fork, or new chain.

SegWit was not instantaneously picked up by every node, and adoption takes time. One of the statistics Casa discussed was that 86% of Bitcoin network transactions are now SegWit.

The speakers then drew an obvious comparison to the adoption of Taproot. Four years later, 14% of transactions are accomplished without SegWit. Similarly, the adoption of pay-to-Taproot addresses, as well as other changes that come along with Taproot, will take time.

But isn’t it an encouraging thought to imagine the network in four more years? What new applications will we be exploring because of Taproot?

Throughout Keyfest, speakers addressed the immense growth we have seen as the Lightning Network, the Layer 2 Bitcoin protocol built to handle smaller, everyday transactions, continues to push the boundaries of adoption.

The total number of public Lightning channels hit more than 70,000 by September 2021. Nodes, channels and capacity all seem to be pointing “up and to the right.” It’s amazing to watch this happen in real-time as an opt-out financial system allows for permissionless wealth accumulation. Now, for Casa.

A number of newly-added Casa features were talked about during this first session of Keyfest. First, Casa announced it would be supporting Taproot addresses — an obvious choice for a platform trying to look down the road toward future adoption.

It also announced integrations for Keystone and Foundation hardware, and added a QR code transfer for encrypted keys, as some people have had issues with the cloud backup previously used which allows the user to store keys locally, rather than requiring cloud use. This change allows the user more choice in recovery options.

Also, changes to inheritance features allow for a streamlined process and in some cases will not require assistance from a Casa employee by use of automation, and in other cases will not require any contracts. Customers are now offered a referral program, as Casa stated that a lot of its users are referrals. A dollar-cost average (DCA) feature was also added, as well as Specter support. Specter allows users to utilize their personal nodes to verify the processes of Casa with their own machines, and Casa actually provides guides on how to do this. This allows users to have more control of their keys within Casa, as they can watch the balance from their own node.

Casa’s engineering team has doubled, which has allowed it to make its microservices more modular and adaptable to change while creating higher levels of efficacy. It was also able to continually test and isolate attempts of attack on its internal system.

The Future of Bitcoin

The second session of Keyfest focused on the question, what does the future of Bitcoin look like?

Neuman returned for this panel and was joined by Peter McCormack from the “What Bitcoin Did” podcast, as well as Obi Nwosu, cofounder of Coinfloor.

Harkening back to the Lightning conversation, there was much focus put on the growth and accessibility of the network. The creation of Lightning allowed for the emergence of Bitcoin Beach, a local community of opt-out citizens in El Salvador who decided Bitcoin worked better for them than the local currency. The world began to take notice, and so too did the government in their home country.

Nwosu’s hopes pointed to Nigeria as he discussed the continued adoption of Bitcoin, stablecoins and altcoins in that region. The naira has become deeply inflated, losing an absurd amount of value over the course of the past 30 years. Many people there look to anything that allows them to opt out of the naira. Stablecoins like tether are allowing them to at least maintain certain amounts of currency instead of having the government cannibalize its value, and bitcoin, as well as altcoins, provide hope to building wealth outside of their existing system. Now, obviously, we want the people of Nigeria on a Bitcoin standard, but their look to outside assets is the beginning, the spark.

Nueman spoke to Casa’s hopes of ensuring greater security for Casa users and accomplishing smoother on-ramps in the future. This becomes an inherent part of the conversation as we ruminate over the thought of other countries adopting a Bitcoin standard. We can see the countries that need it the most are those most likely to struggle finding an on-ramp with ease of use or accessibility. When the topic of adoption in these areas of the world arose, Neuman said that it starts with the fact that mostly everyone has a smartphone of some kind, meaning that’s where the application layers need to be, but he deferred to a more granular exploration from Nwosu.

Nwosu then discussed the need to further decentralize and strengthen the network. With B Trust, one of its goals is to onboard and educate developers of the world that are located in these areas. Few people are more apt to design solutions for a people than those who experience the issues themselves. As Nwosu said, “Einsteins don’t only exist in North America and Europe.”

Nwosu went on to explain that most people in these parts of the world are still relying on exchanges for storage purposes. This need to decentralize and strengthen the network leads to the obvious, yet elegant solution of collaborative second-party custody, which is currently being utilized in El Zonte, El Salvador. Essentially, this is where multiple people get together and, through a shared wallet using multisig, each user pools their bitcoin, effectively creating a local bank or credit union.

Nwosu also voiced his opinion that nation states have proven to be the best educators on Bitcoin (insert coy smile). This happens when we have places like China or Turkey come smashing down with a ban hammer and trying to prevent adoption. In both cases, people opted out of their current systems and found something that actually worked for them. The banning of an asset like bitcoin leads to further curiosity and increased conviction. It’s getting to the point that we almost want countries to ban Bitcoin, isn’t it?

The future of Bitcoin is set on furthering decentralization by increasing nodes for both Bitcoin Core and Lightning, while drilling down on education as organizations and individuals like Nwosu focus on bringing in new development talent from the places that need help. Meanwhile, we look to the world of increased Taproot adoption and the furthering of applications, which took us to the final conversation of the day.

This part of the conversation focused largely on applications that the panel were excited for and why these different applications matter. John Tinkelenberg, content marketing manager for Casa; Matt Hill, CEO of Start9 Labs; and Lamar Wilson, cofounder of Black Bitcoin Billionaire led this session.

Read More:   For Africa, By Africans: How Qala Is Building Bitcoin Developers Today

The beginning of the conversation started with the understanding that nodes have long been the backbone of the Bitcoin network. They serve as necessary validators in the process of making sure blocks continue to accurately represent the data within them. As Bitcoin has progressed, these nodes also allow a purpose of furthering decentralization by running your own server. Having your own server means being in control of your data. This is a personal responsibility.

The theme of this conversation was: the more free you want to be, the more responsible you need to be. There was a strong focus on creating your individual sovereignty by taking responsibility for your existence in the network by running your own node. Becoming immersed and learning each aspect of what it takes to be on the network and have responsibility to it is what allows many Bitcoiners their continued conviction and their ability to innovate within the space.

When asked to explain the differences between Umbrel and Start9, Hill continued to express these values as he explained that one, he’s clearly biased, and that two, that people should do their homework on a platform before becoming involved with it. While there are similarities in these different platforms that make running a node more accessible, there are also stark differences between them. It is the responsibility of each sovereign individual to do this research and find the platform that is best suited to them. Here are some fun applications that were discussed:

The sessions on the first day of Keyfest served as a great introduction into what Bitcoiners and Casa want the future of Bitcoin and application development to look like. There is a clear focus on providing greater security and knowledge to the community at large and furthering the decentralization of the network with continued progress that will allow higher levels of adoption in the places that need it the most.

This is a guest post by Shawn Amick. Opinions expressed are entirely their own and do not necessarily reflect those of BTC Inc or Bitcoin Magazine.

Bitcoin And The Smallest Businesses: Cantillon Effects And Why They Need Bitcoin Today