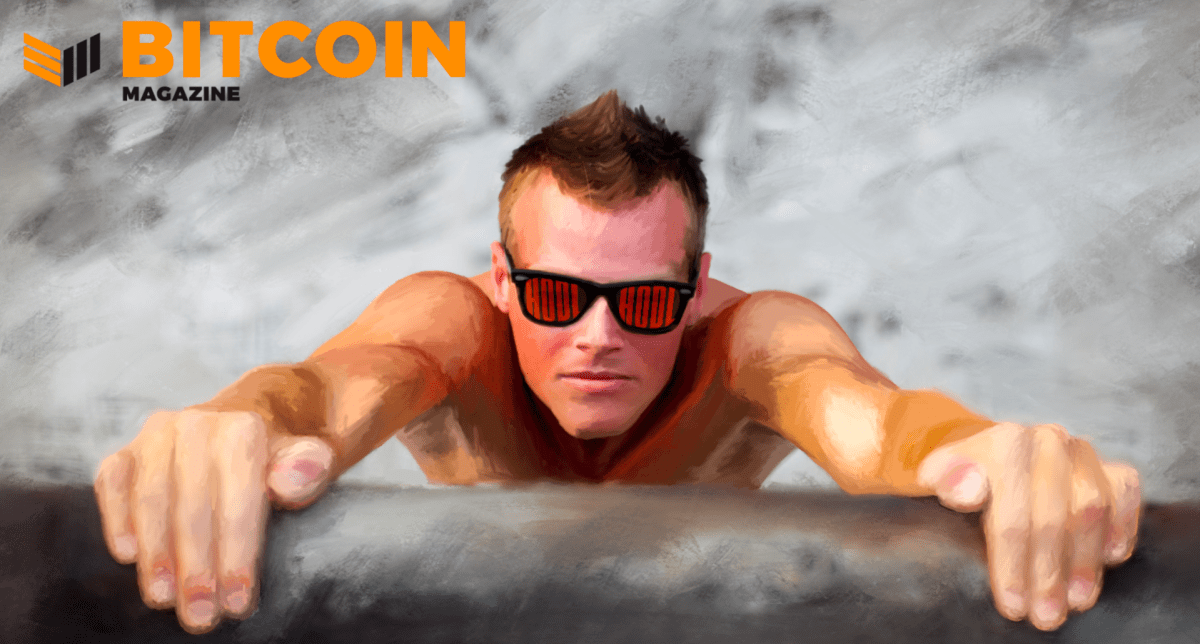 “I type d that tyitle twice because I knew it was wrong the first time. Still wrong. w/e.”

Eight years ago today, in a now infamous, whiskey-soaked Bitcointalk post, a meme was born.

“so i’ve had some whisky

(but only if it’s payable in BTC)”

Starting 2013 at around $15, the bitcoin price had just risen to an all-time high over $1,100 when the message was posted, and little did its author, GameKyuubi, know that while his then-current condition would prevent him from spelling correctly, the energy and passion behind his mindset would inspire millions of people across the planet to treat their satoshis like the precious assets they are.

The “HODL” meme is both as innocuous as it is powerful, and the sentiment behind the post is as true in 2013 as it is today in 2021. No, it is not an acronym for “hold on (for) dear life,” but indirectly it has taught us the most practical and overall most successful method for how to handle your bitcoin exposure. Presidents, senators, CEOs, congressional members and plebs alike all have signaled their ideal money financial strategy with these four little letters.

But what does it mean to “HODL” (or “hodl”), and why has it captured such a huge network of public figures praising and utilizing its name? In a surprisingly flawless use of spelling, capitalization and the English language, GameKyuubi finished the meat of his post by writing, “In a zero-sum game such as this, traders can only take your money if you sell.”

Within 10 minutes of the post going live, multiple responses to this newfound camaraderie appeared, culminating in a “I AM HODLING!” meme from “300” (the 2006 film) by user Piramida. Things move fast in the Bitcoin space, and by the turn of the hour, over 20 posts from Bitcointalk users referenced the misspelling, including a handful of posts prophetically shedding light on the “memeability” of “HODLING.”

It all just goes to show you that signal is signal, regardless of whatever temporary motor skill impairment might be occurring in the individual responsible for dispensing said truth.

“WHY AM I HOLDING? I’LL TELL YOU WHY. It’s because I’m a bad trader and I KNOW I’M A BAD TRADER”

The liquid-encouraged humility of GameKyuubi is something we can probably all stand to relate to a bit more. Trading is hard, and the retrospective glances at historical charts can bring a very false sense of ease for the emerging retail day trader.

Read More:   Bitcoin Is Venice: The Merchant Strikes Back Today

Blow-off tops and generational bottoms are easy to spot after the fact, and despite all of the loving warnings from experienced HODLers to first-cycle traders, at every inflection point, high and low margin traders alike get their liquidation emails or simply get stuck buying high and selling low. Again, trading is hard, and the very wonderful qualities that make bitcoin a decentralized market of true price discovery also make it susceptible for experienced market makers to sweep lows and find your stops, while also baiting the inexperienced to buy their exit liquidity with moon price predictions and other bull-trapping techniques.

The best strategy, as outlined by GameKyuubi, is just to simply hold your bitcoin, stack humbly and not worry yourself with the tax implications and the economic risks of attempting to time the selling of tops and try and catch knives on bitcoin’s inevitable and iconic merry-go-round of volatility.

As it currently stands, bitcoin is regulated as a commodity, much like a typical security or stock option, and with each conversion between satoshis and dollar-denominated stablecoins comes a taxable event. By HODLing, not only do you not put your digitally-scarce bearer asset in the hands of the bigger-fish traders, you get to keep your bitcoin from ending up in the gullet of the two biggest market manipulating fish of them all; the IRS and the extended United States budget committee.

Limiting your exposure to stop-loss hunts and removing your bitcoin from centralized exchanges is not just good financial advice, it is an ethical and game theory necessity to avoid the pitfalls and disadvantages of legacy markets.

There was no option to remove your stock from the CME, NYSE or precious metal markets such as COMEX and actually physically hold the tokenized representation of ownership, and thus little to no ability to take responsibility for your assets in a self-custodial way, nor to perform an audit on actual circulating share supply. These technological issues have come up many times, with JPMorgan paying a $1 billion dollar fine, the largest financial fine in history, for spoofing silver markets, and of course, the now infamous naked short selling of $GME by Citadel, the hedge-fund behind the pay-to-order, “zero-fee” trading books of the Robin Hood brokerage app.

Of course, when GameKyuubi channeled their inner Nostradamus, the trading vehicles for bitcoin were vastly underrepresented compared to now, but the few that did exist were highly unregulated and even more prone to wild liquidation events in BTC-denominated volume, despite far less volume in USD terms.

Now, with meaty institutional interest and corresponding exchange-traded funds live across the world, the opportunity for veteran traders to get a piece of your economic activity has never been more ample. To HODL is to limit your exposure to not only the compounding, lossy inflation vampire of fiat central banking, but also to humbly sit on your hands and self custody your liquidity away from centralized failsafes and the exposed attack vector that is trying to trade on a public book.

“…but you know what? I’m not part of that group. When the traders buy back in I’m already part of the market capital…”

HODLing is not just a good idea for avoiding capital gains taxes, but also a fantastic method of keeping your mental health intact as we surf the waves of true price discovery.

Bitcoin is a free market that allows its users a unique but double-edged outlet from the madness of market opens and closes, un-auditable share supplies and exchange circuit breakers, for the price of a different beast; a 24-hour, “we never close” market. The opportunity costs of simply ignoring the real-time fluctuations and HODLings may not be transparently clear on your PnLs, but perhaps stunningly apparent in your quality of life.

For some, this is a revolution, for others, simply savings, but to all, Bitcoin should be viewed as a means to whatever end. And what better end than a head out of the Ichimoku clouds and far away from one-minute candlesticks?

Many of the economic benefits to the Bitcoin protocol simply are not being utilized until you take personal responsibility for your wealth. But wealth is health, and the simplicity of the HODL strategy is to find the perfect balance between exposure to healthy volatility, with the price historically trending up, without letting your satoshis out of your personal sovereignty.

To know that, no matter what decisions elected (or unelected) officials make overnight, that your share of the network is mathematically secure — this is to know a financial nirvana not before available to humanity. Take advantage of the orange-colored lifeline and get off the ride of the fiat rat race. If you find the nausea of the ride exhilarating, by all means, trade away, but never, ever, let your main bitcoin leave your HODLing grasp.

To paraphrase a man who took his alias from this very meme, American Hodl, “…HODLing bitcoin is very simple, but it’s not easy, it’s f—-ing difficult.”

And while one must agree it is difficult to find the maturity to HODL, the mechanisms of a proper cold storage solution combined with the eternal wisdom of that “time in the market is greater than timing the market” continues to drive the simplest solution to the bitcoin game; stay humble, stack sats.

Zoom out and realize that the seemingly many opportunities to find a few percentage points of alpha in properly timing bitcoin’s price swings will simply round themselves away over time. We all like to hound the charts and news aggregates for any hint of what comes next, but those who have kept their heads down, dollar-cost averaged and perhaps momentarily increased their savings allocations during red days have come out significantly ahead over the last halvening epoch.

The compounding annual growth rate of bitcoin against the dollar is quite literally unprecedented in historical asset markets since the launch of the Bitcoin network just four years before the HODL meme was born.

It is a simple act of rebellion from our fiat overlords, but the conviction shown from those who HODL’ed throughout the ebbs and flows of the highs and lows of a free energy market in true price discovery mode should inspire future HODLers of this emerging, disruptive technology.

March 2020 was perhaps our most recent and truest test of resolve, but it will not be the last. The price you pay to get access to such necessary volatility is exposure to moments that remind you that there are no circuit breakers in free markets. The gift you receive for paying that price, however, is the truly decentralized miracle of a digitally-scarce bearer asset that can actually give users ownership of a piece of Satoshi’s immaculate conception.

If you have been HODLing along for the past eight years, you surely have felt the life-altering effects of the Bitcoin network. So, raise your whiskey, or actually, according to the bottle mentioned in the original post, your “whisky,” and toast to the mostly-articulated gospel of GameKyuubi, as our beloved “HODL” turns eight years old. It has served us all very well thus far; a rallying call for seasoned Bitcoiners to calm the nerves of young coiners.

If Bitcoin continues to grow and attract new users in the explosive ways it has thus far, then truly the best is yet to come for those who HODL.

This is a guest post by Mark Goodwin. Opinions expressed are entirely their own and do not necessarily reflect those of BTC Inc or Bitcoin Magazine.

“Weimar Signs” In Brooklyn Show The Money Is Broken Today