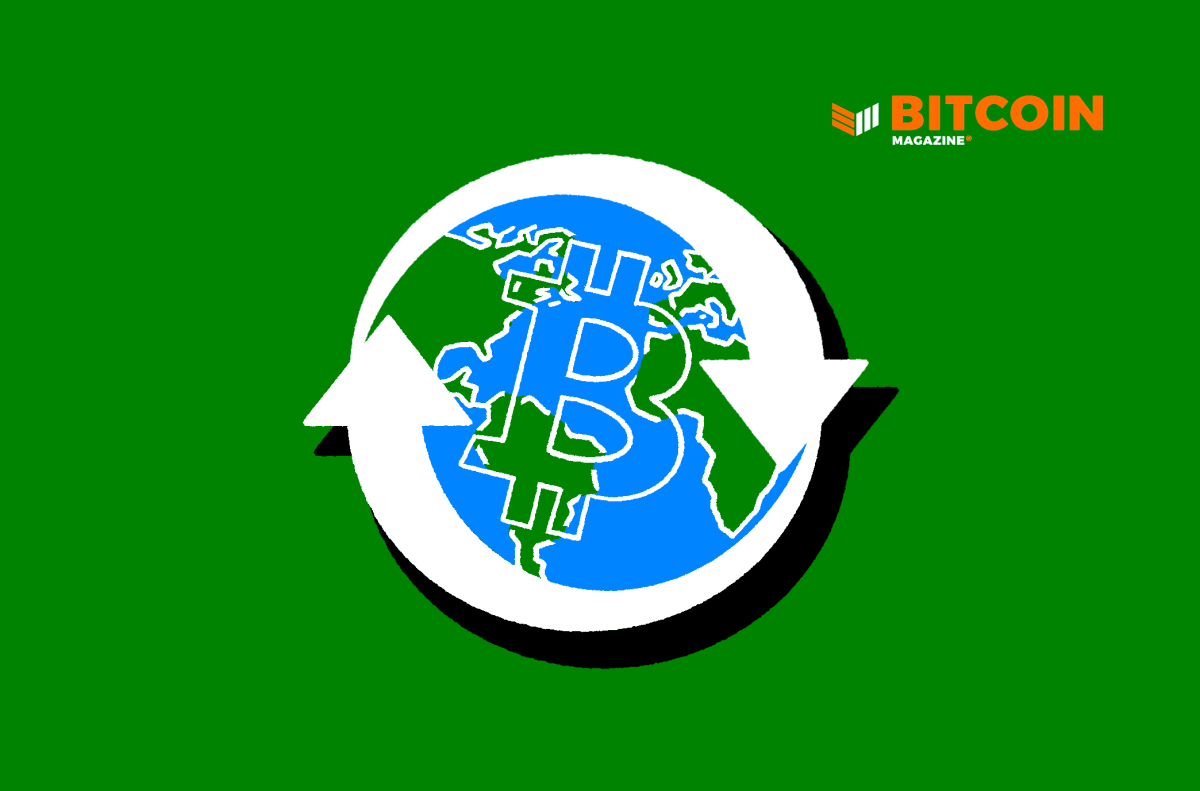 Daniel Batten is a climate tech investor, author, analyst and environmental campaigner who previously founded and led his own tech company.

2022 has changed everything that we in the environmental, social and governance (ESG) sector thought we knew about Bitcoin. We thought it was a net negative for the environment. We could not have been more wrong.

It turns out that Bitcoin mining has the potential to avoid an astonishing 0.15°C of global warming.

This is true because Bitcoin is the only technology that’s available, practical and scalable when it comes to tackling the world’s most deadly greenhouse gas of 2022: methane.

More on how Bitcoin helps later. But first, I say methane — not carbon dioxide — is our most deadly greenhouse gas because the U.N. Environment Programme (UNEP) has just come out and said “Cutting methane is the strongest lever we have to slow climate change over the next 25 years.” This is true because when methane escapes into the air unburnt it is 30 times more warming than carbon dioxide over a 100-year period. Last year, a NASA satellite survey of 1200 flares told us that there’s a lot more of it leaking into our atmosphere than we thought, 2.5 times more in some cases.

Fortunately, methane only stays in the atmosphere for nine to 12 years. That means if we find a way to reduce methane emissions, the climate impact will be felt almost immediately. You might think, “If it only stays around for a decade, why does it matter?” It matters because during that decade, the warming impact is so huge that it could be enough to single-handedly create irreversible climate feedback loops.

Now there’s a very important nuance with methane emissions: Methane in the form of natural gas that is burnt when firing up a gas heater or stove is carbon positive because burning it releases carbon dioxide that would otherwise not have escaped into the atmosphere.

But, methane that would have otherwise escaped into the atmosphere gets burnt is carbon negative because the carbon dioxide it produces, however harmful, is still a quantum less harmful than having methane escape into the atmosphere. If we can combust enough of this escaping methane in time, we might be able to avoid climate disaster.

Unfortunately, the oil and gas industry hasn’t solved that problem because existing solutions such as “flaring” that gas does not completely burn the methane. The International Energy Agency estimates that flaring gas is only 92% efficient, meaning 8% of all flared methane still escapes into the atmosphere. That 8% is having a huge climate impact.

As an environmentalist and a climate tech investor, I never intended to do deep research on Bitcoin. But in March 2022, Greenpeace, an organization I’d supported since the 1990s, came out against Bitcoin, and I decided it was time to do my own research.

Analyzing countless statistics, and talking to people on both sides of the debate including energy engineers, bitcoin miners, environmental activists, and climate scientists, I expected to confirm my view, “Bitcoin is worse for the environment than Bitcoiners say, but not as bad as Greenpeace says.”

What I discovered shocked me: Greenpeace and other environmentalists’ assessment of Bitcoin, including my own, was totally wrong. Bitcoin is in fact better for the environment than even the bitcoin miners made out.

How Did We Get It So Wrong?

The strength of Bitcoin is that it’s a network, not a company, but this strength makes Bitcoin vulnerable because it has no coordinated way to control a media narrative like a company would have. Into this gap, the antagonists of Bitcoin — many of whom have vested interests in seeing this new technology fail, as happens when any disruptive technology emerges — had successfully controlled the narrative about Bitcoin and the environment.

In my research, I found Bitcoiners to generally care deeply about the environment, but have little desire to blow their own trumpet. For example, Daniel Roberts from Iris Energy says, “We’ve been focused more on just solving problems rather than … telling the world how green and sustainable we are.”

On the anti-Bitcoin side, I found most claims about energy usage stem from a single oft-cited article in Nature, which continues to be widely referenced despite having been widely discredited. A litany of environmental organizations including Greenpeace have quoted this research as though it were solid science that went through an authentic peer-review process. Neither is the case. This article contained the false assumption that the price of bitcoin would forever grow at the same rate as during the most aggressive part of the 2017 bubble. The article was written by undergraduates at Hawaii State University as an exercise to gain experience of the publication process.

To highlight how dangerous the continued referencing of this paper is, imagine if the UNEP, Climate and Clean Air Coalition to Reduce Short-Lived Climate Pollutants and Intergovernmental Panel on Climate Change all used a single two-page article written by fledgling undergraduates as the sole basis for our world’s understanding of, and response to, climate change.

Since then, commentary on Bitcoin’s environmental impact has continued to run something like this: “It uses a lot of energy in its creation. Some of that energy comes from fossil fuels, so it is bad for the environment.” When the “it” is Bitcoin, the bad logic goes unrecognized, but when “it” is solar, the bad logic is there for all to see.

Imagine the argument: “Solar panels use a lot of energy in their creation. Some of this energy comes from fossil fuels, so solar panels are bad for the environment.”

It is true solar does use a lot of energy in its creation, mostly supplied from coal furnaces. However, the conclusion that solar is bad for the environment is clearly wrong because we’ve only looked at the energy it uses, not the greenhouse emissions it prevents.

To have an unbiased assessment of Bitcoin’s environmental impact, we must evaluate Bitcoin the same way: by quantifying the greenhouse gasses that bitcoin mining can feasibly prevent. I began quantifying this number.

The answer I calculated was astonishing. Through clean combustion of flared gas from oilfields and landfills alone, Bitcoin can reduce methane emissions by a phenomenal 23%. That means bitcoin mining using escaped methane can avert more than half of the entire UNEP 45% methane-reduction target of greenhouse emissions single-handedly, and prevent more than one-twentieth of all global greenhouse emissions.

We are now already at 1.1°C above pre-industrial temperatures. That’s only 0.4°C away from the crucial 1.5°C tipping point that global leaders agree could be an irreversible threshold. In this context, 0.15°C is enormous; it literally could be the difference between success and failure in avoiding climate disaster.

To grab this opportunity, bitcoin miners must respond exponentially fast and they are. Many more miners are using methane today compared to 18 months ago.

Where Does That Methane Come From And Why Can Bitcoin Mining Make Such A Difference?

The methane in the atmosphere from human activity comes chiefly from three sources: the oil and gas industry, landfills and animal agriculture.

Oil fields emit methane when natural gas is released during extraction. Because oil fields are typically many miles from a gas pipeline or electricity grid, there is no economical way to use that gas, so it typically gets wasted by burning (flaring) it. The problem is, flaring is not 100% efficient. Only 92% of it gets turned into carbon dioxide. The rest goes into the atmosphere unburnt, and is responsible for 1.7% of greenhouse emissions.

Landfills are an even bigger problem. Again, the majority of landfills are too far from the grid or a gas pipeline to be able to use that gas, so again, it just gets flared. Except it’s worse, a recent study showed that 70% of landfills in the U.S. vent their methane gas directly into the atmosphere. Globally, landfills are responsible for an incredible amount of all greenhouse emissions.

How Does Bitcoin Mining Help?

It’s logistically and economically very hard to dispose of or use wasted methane from the oil industry or landfills. However, Bitcoin mining’s unique features make it the world’s only candidate that can immediately start slashing methane emissions from both places.

Let’s pick landfills. In March 2022, U.S. regulators passed a bill that requires landfill operators to start capturing their gas. This system involves a combination of pipes and a flaring system. However, according to one source in the waste management sector who wished to remain unnamed, some states have said they will defy this ruling. Others resent what he estimates is a $1 million cost of having to install a flare stack. Even if every U.S. landfill started flaring in 10 years (unlikely), 8% of all methane would still go into the atmosphere unburnt.

Instead of paying $1 million, the flare stack can be turned into an asset for the landfill operator at the same time as slashing methane emissions. What happens in this scenario is a unit is installed onsite that safely removes toxic emissions from landfill gas, precombustion. Next, the resulting methane gas is burnt. A generator converts that heat energy into electrical energy, which is used by an onsite bitcoin mining mobile unit. Because bitcoin mining units can operate onsite, they need no gas pipeline and can be up and running within weeks of a landfill operator signing a contract.

The bitcoin mining company secures cheap electricity. The landfill owner turns an environmental, regulatory and economic liability (methane) into an asset, earning money per KWh of electricity produced. Most importantly, because that gas is cleanly combusted, the emissions from each landfill are reduced. This solution can be repeated and scaled easily. For the oil and gas industry the process is even simpler as there is no need for the toxic gas purification process precombustion.

Until methane collection and/or sequestration technology become practical (still some way off), combusting this methane into a 30-times-less warming gas called carbon dioxide is the best option we have to avoid the devastating climate impact of methane leaching into the atmosphere.

Because bitcoin mining only requires an Internet connection, not the millions-of-dollar-per-mile build-out of gas pipelines, it is currently the only technology that can combust this wasted methane in a way that can scale up fast enough to meet our most pressing methane reduction targets.

It’s true that the number one source of methane is animal agriculture and moving to a more plant-based diet would slash methane emissions. However, I would say we should do that as well as, not instead of, bitcoin mining.

Many people immediately think, “There are many other things we could do with this methane.” Theoretically, this is true. The problem is that unless you want to co-locate next to an oil field or landfill, this energy needs transport at $2 million per mile for pylons and $5 million per mile for gas pipelines.

While Satoshi Nakamoto never intended this benefit, Bitcoin could plausibly help us eliminate 0.15 °C of climate change by 2045 based on my calculations. Incredibly, that makes it the only technology currently able to reduce methane emissions to the levels needed to avoid 1.5°C global temperature rise.

Because the impact of reducing methane is felt almost immediately, bitcoin mining is the fastest technology we have to slow climate change. It’s an incredible fact to get accustomed to. That is why I say that an ESG attack on Bitcoin undermines the credibility of ESG, not Bitcoin.

It is our bitcoin miners who are making this true. They won’t sing their own praises, nor should they have to. I believe it’s high time we get behind the critical work they do for us all.

Check out my full study on how bitcoin mining lowers methane emissions.

This is a guest post by Daniel Batten. Opinions expressed are entirely their own and do not necessarily reflect those of BTC Inc. or Bitcoin Magazine.